I offered to make cupcakes for a family memorial reception last weekend. Little did I know at the time what I was getting myself into. It wasn’t the act of picking up the necessities, planning the “cupcake menu” or even making the cupcakes that was an issue. It was the storm that hit before the calm…

I decided early on that I’d make Milky Way Cupcakes  with Carmel Buttercream Frosting, Chocolate Cupcakes with Raspberry Buttercream and Lemon Cupcakes with Cream Cheese Frosting.  For the Milky Way Cupcakes and the Chocolate Cupcakes, I used my friend Sandra’s family recipe for Chocolate Cake and split the recipe in half between the two types. For the Caramel and Raspberry Frosting, I used my Caramel Buttercream recipe and split between two bowls before flavoring with caramel. For the Caramel Buttercream I added caramel to taste. For the Raspberry Buttercream, I used a combination of raspberry jelly (or was it jam? It was whichever one doesn’t have seeds! 🙂 ) and a tiny bit of raspberry flavoring to taste. Sounds like a piece of cake, right?

The memorial reception was on Saturday afternoon. My plan was to bake to my little hearts content on Friday evening and dive into decorating Saturday morning. After the funeral service on Friday afternoon, my family and I went out to dinner. It’s been a long time since we’ve all sat down to dinner together. We see each other often enough, but getting us all in the same place at the same time for dinner is a bit challenging these days. Dinner was lovely and the family time couldn’t have come at a better time. While we were out enjoying each others company, the dogs (a Cocker Spaniel and a Jack Russell Terrier, both 4 years old) were home having a lil’ party of their own! When we came home, I found my supply bag knocked off a table, onto the floor on its side with all its contents strewn across the room. The dogs found the Milky Way candy bars!! They hid at least one in the couch which was later found when one of the dogs went over to claim his precious prize. There were 10 additional Milky Ways that had not been found. We can only assume they ate them. All of them. Bad dogs! As you can imagine I was furious but I also had to laugh. I laughed even harder as both dogs sat patiently and waited for their bedtime treats, as if they hadn’t had enough that evening! No treats for them!

Without the Milky Ways, I couldn’t make the chocolate cupcakes that evening as originally planned.  It would have to wait until morning when my brother so graciously picked me up more candy bars. Afterall we do believe it was his dog that instigated the little Milky Way Soiree to begin with!  But not all was lost. The Lemon Cupcakes, although absolutely divine, are pretty high maintenance. If it wasn’t for the assistance of my sous chef (aka mom 🙂 ), I would have been up until midnight making these lemony gems. I can’t imagine mixing in a batch of Chocolate Cupcakes the same evening – though Sandra’s family recipe for chocolate cake is super simple and super amazing!! 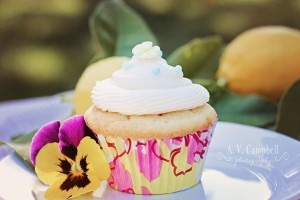 In a large bowl, using an electric mixer, beat butter and 1 1/2 cups sugar until light and fluffy. With mixer on low, beat in eggs and yolks, one at a time. Beat in 2 tablespoons lemon juice. Alternately beat in flour mixture and buttermilk beginning and ending with flour mixture; mix just until combined.

Divide batter between each cupcake holder. Bake until a fork comes out clean when poked, 18-25 minutes. Let cool 10 minutes.

While cupcakes are baking, bring remaining 1/2 cup sugar and 1/2 cup water to a boil in a saucepan. Add lemon slices and simmer 25 minutes. Using a slotted spoon, remove lemon. Add remaining 1/4 cup fresh lemon juice into syrup. NOTE: my lemon syrup provoked a rather unattractive, yet hilarious “lemon face” when tried. I (well, really my sous chef 🙂 ) added corn syrup, a little at a time until the flavor mellowed to our liking.

The rest of the gang…. 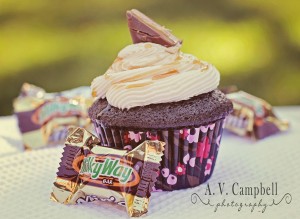 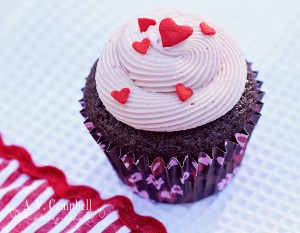