4 years ago this past June, I searched the inter-webs for a Mobile Groomer. My gentle-giant of a cat Andy, weighing in at 18 lbs needed a good grooming and my vet office at the time would no longer schedule grooming appointments that fit within my work schedule. I called a few groomers, left a few messages and ran across a local mobile groomer who after speaking over the phone, I felt comfortable with trusting my boy in her care. A few days later I met Leslie in person. She was kind and friendly and both cats took to her immediately. Leslie took Andy to her van parked outside and gave him a bath and the cutest cut ever. When my boy came back in, he had an animal print bandana tied around his neck. He was so handsome. Leslie raved about how sweet my dear little Andy was. He let her bathe and groom him without ever putting up a fight. As a cat mom, that made me happy to hear. 🙂

Later that night, Andy’s breathing was strange. He was panting. I didn’t think that was normal, but quite honestly, I didn’t truly know. Andy and his sister were my first cats, so every experience with them was a first for me. By the next morning Andy had gotten much worse. I knew something was terribly wrong so I rushed him to the ER vet as our regular vet was not yet open. It’s hard to explain, but the next few days are days I’ll never forget, yet they’re also somewhat of a blur. After a series of tests, Andy was diagnosed with heart disease. My boy was sick and not just sick, by the next day, I’d learn he was beyond saving. 😦 Andy spent 2 1/2 days on oxygen. The vet could only take him off oxygen long enough for me to visit him a few times each day. I was a wreck. The vet office was amazing. Absolutely. Amazing. They were so accommodating in allowing me to stop by and visit with Andy, one-on-one in one of their examining rooms, never rushing me. Comforting words, sympathetic looks over my many tears and the occasional hand on the shoulder to provide assurance that I was not alone. Truly amazing. I had contacted Leslie when Andy was first admitted as he wasn’t stable enough to begin testing and the vet suggested seeing if anything had happened the previous day that might help explain his condition. It was a hard call to make as I certainly didn’t want to be accusatory. When I spoke with Leslie, she was so kind, compassionate and showed such concern for Andy. Andy was easy-going (which we know now was stress) and was the perfect client. No issues. I lost Andy three days later on a Sunday morning. He peacefully passed in my arms while I whispered in his ear how much I loved and would miss him.

**Wipes tears and pulls self together**

The point….. I strongly feel people come into our lives when we least expect it and when we tend to need them most. Leslie was (is) a true blessing. Although at the time, we had only met once, I felt an instant friendship with her. There’s some people who you just  immediately hit it off with, without really knowing a thing about them. There are others that you could know for years, but truly not know at all. Over the last 4 years, Leslie and I have remained in touch and have gotten to know each other more, via social media.

Andy’s sister Noelle, now just a few weeks shy of being 18 yrs old this October, has been in desperate need of a mani/pedi. Older cats nails grow at lightning speeds and if ignored, grow back into their little paw pads within the blink of an eye. Noelle has always been high-strung. My little diva. The thought of taking her to the vet to get her nails clipped, especially as she’s getting older, stresses me out. Not to mention she stresses herself out so much that usually within 10 minutes of being in the car (often times before I’m even able to put it in drive), Noelle has thrown up. Ugh. But not to worry, Leslie came to my rescue once again. 🙂

On her own time, Leslie came by one evening this past week and not only trimmed Noelle’s nails for me at no cost, but she also gave me a nail trimmer that she picked up especially for my girl. It’s been 4 years since I had seen Leslie and it was like we were old friends. 🙂  We talked about Andy and what we both learned from that experience, an experience that in an unexpected way, bonded us. I’m so grateful for all the kindness Leslie has shown to me. So. Very. Grateful. You see, when I lost Andy, Leslie wouldn’t accept payment from me for his grooming. And she wouldn’t accept payment for trimming Noelle’s nails. Knowing that she couldn’t pass up dessert, I did what I know best and made Leslie some homemade cupcakes! But not just any cupcakes…. 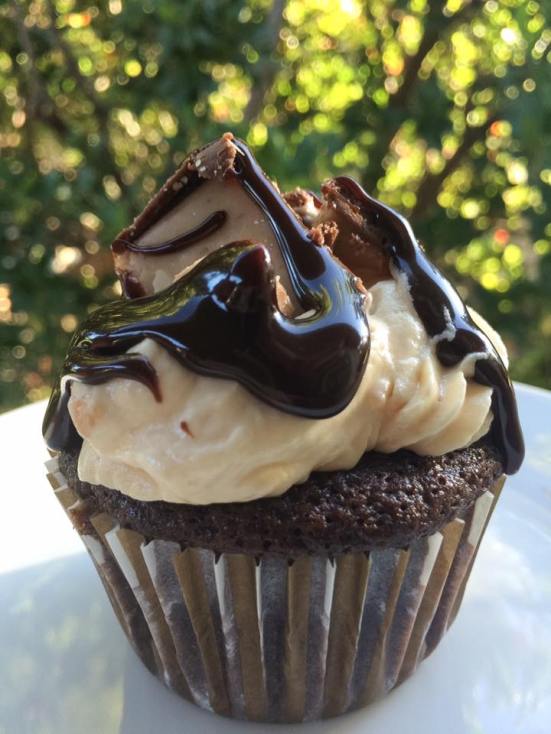 Mix the above ingredients in a mixing bowl.  Set aside.

Make a hollow in the dry ingredients, then add the wet mix and hot water. Mix only until blended.

Put into prepared pans. Bake in a 350 oven. Time depends on the pan size. I bake for about 25-30 min for 2 8″ cake pans & less for cupcakes. Check at about 15-18 minutes. When done, a tiny bit of crumb should adhere to the toothpick

Cream the butter and shortening in the bowl of an electric or stand mixer. Add the vanilla extract, salt and caramel syrup and combine well.

Begin adding in the sugar and mixing thoroughly after each addition. After all of the sugar has been added and mixed thoroughly, taste and decide if you want to add in more Salted Caramel. For thicker frosting you can gradually add in a little more sugar. Mix in Heath Toffee baking pieces.

2 thoughts on “Strangers are Friends Waiting to Happen!”