While preparing pork chops with cream of mushroom soup for dinner, I contemplated my starch options. Usually I could forego a starch side without a second thought, but when having pork chops with cream of mushroom soup, you need something to soak up the delicious gravy-like soup. 🙂  Pasta or rice?  That was the question. I hate to waste food and I knew that I wouldn’t be able to eat the left-over rice or pasta I was bound to be left with.  It then dawned on me that I still had whole milk left over from making Boston Cream Pie Cupcakes. The wheels started turning…  rice, whole milk, eggs… BINGO!! Rice Pudding!!! 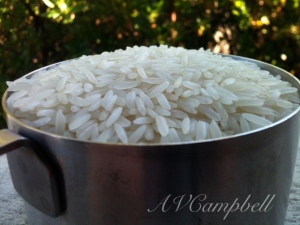 My very first cookbook when I moved out on my own was Betty Crocker’s New Cookbook. It’s a spiral bound paperback cookbook that shows its age with food splattered, wrinkled and folded pages. There are a million post-it-notes serving as page markers.  Miscellaneous hand-written recipes are stashed throughout on notecards and binder paper. Although I’ve collected several cookbooks since, it is my Betty Crocker cookbook that contains my favorite Rice Pudding recipe. 🙂

Rice Pudding is the ultimate in dessert comfort foods.  When served warm, this creamy sweet treat can make you forget all the days worries.

Heat rice and water to boiling in 1 1/2-quart saucepan, stirring once or twice; reduce heat to low. Cover and simmer 14 minutes (do not lift cover or stir). All water should be evaporated.

Bake uncovered 45 minutes, stirring every 15 minutes. Over baking may cause pudding to curdle. Top of pudding will be very wet and not set.

Stir well; let stand 15 minutes. Enough liquid will be absorbed while standing to make pudding creamy. Serve warm, or cover and refrigerate about 3 hours or until chilled. Serve with whipped cream. Refrigerate any remaining dessert. 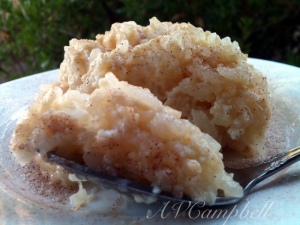 A few notes from Allison’s kitchen… this recipe is pretty forgiving. I use whatever left-over cooked white rice I have, hot or cold. I do not like raisins. Emphasis on the DO NOT! Therefore, I’ve never included them. One of these days I will try the addition of dried apricots as I do love them! I imagine dried cranberries or pineapple would also add a nice twist. I love vanilla so I often double what’s called for. This pudding is delicious as is, straight from the oven. I’ve never served this pudding with whipped cream, I think it’s unnecessary. Though I find whipped cream is unnecessary in most desserts. I’d rather save the calories and enjoy more of the dessert at hand than waste them on whipped cream topping! 😉

Rice Pudding is delicious warmed for breakfast, dessert or as a sweet snack in between meals!