It’s the eve of Superbowl and you know what that means… the smoking of brisket and ribs have begun, chicken is marinating, beans are soaking for chili’s and bean dips, meatballs are being hand rolled and drown in BBQ sauce in the slow-cooker, sour cream is flying off the shelves of supermarkets while gallons of onion dip are being prepared across the country.  And beer.  How could I have forgotten beer!? I didn’t. 😉 Let the beer consumption commence! NOW!!

I had a slight panic attack this morning when I couldn’t find my Spinach Dip recipe. I thought the world might actually be coming to an end. OK, I’m being dramatic. I wasn’t that upset. But I was slightly concerned. How could I have been planning for over a week to make Spinach Dip for the big day to find the day before I can’t find the damn recipe!? Then again, I haven’t claimed to be the most organized in thought lately. 😉  After a few deep breaths and tripping over the cat, I thought “if I was a spinach dip recipe, where would I be?” Bingo! Hiding in my Betty Crocker cookbook, on a slightly wrinkled email dating back to 2002! Ahhhh…  All is right with the world. Again.

This is THE MOST slammin’ Spinach Dip I’ve ever had!! EVER!  One taste, 12 years ago and I keep coming back.  I wouldn’t even think of using another recipe. Or going with store bought. 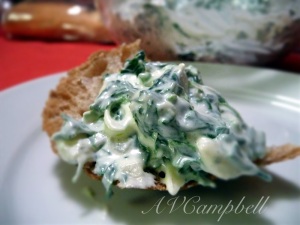 Note: for a lower fat and calorie version, substitute some of the sour cream and mayonnaise with plain yogurt.